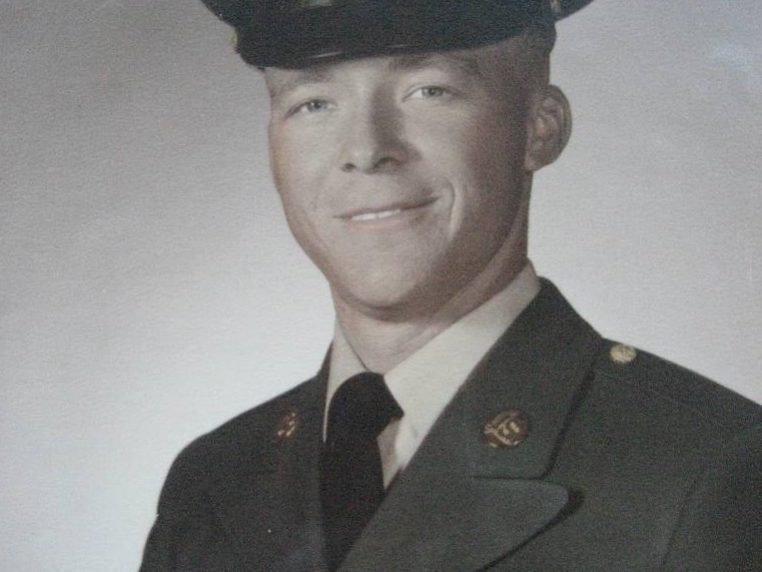 At a tense time during the Cold War, Jerry Peppel answered his nation’s call. In January of 1966, the Florida native reported for assignment as a member of the U.S. Army where he graduated from Office Candidate School. Jerry was assigned to Headquarters, Battery, 2D Battalion, 6th Artillery 3D Armored Division (Spearhead) in Gelenhausen, Germany. He served as an S-3, with top-secret clearance, responsible to the Battalion Commander for planning and supervision of all training and field operations.  These duties included overseeing the training and field employment of over five hundred officers and men. He recommended and assisted in the potential use of much complex field equipment including nuclear-capable howitzers. He returned state-side in March 1969, where he served in the Army Reserve until September 1973.

Upon returning to Florida, Jerry spent the next 40 years working in the automobile industry. In 2012, Jerry was diagnosed with Corticobasal Degeneration, CBD. Corticobasal Degeneration is a progressive neurodegenerative disease that affects the cerebral cortex and the basal ganglia.[i] As Jerry’s condition progressed, his symptoms included dementia and Parkinson’s-disease-like signs.  At present, he is unable to stand on his own, feed himself or walk unassisted. He can speak on occasion, but not on cue. As the disease progressed it was determined he would be served well with a shower commode chair. Jerry was prescribed a Raz-AT, tilting rehab shower chair.

Jerry’s wife, Joyce Peppel, immediately recognized the value of his chair. “We use it as a shower chair and a commode. Since the Visco foam seat is so comfortable, we even use it as a wheelchair around the house.” Although she sees the importance and value in the quality of a shower chair seat, it is the primary feature of the Raz-AT that Joyce finds most beneficial, the tilt function. The Raz-AT rehab shower commode chair has a 40° tilt range. The tilt serves a couple of purposes for Joyce. “The tilt allows me to clean him properly, since I cannot stand on my head to clean him. I also tilt him back to make it easier to slide him back.” As she ages, Joyce finds that a shower commode chair that can tilt makes hygiene programs much easier. She is able to reach and clean all areas with relative ease compared to a chair without tilt. “The Raz-AT tilt makes all the difference, for an old lady like me.”

The Raz-AT can be adjusted to provide 15° of forward (anterior) tilt, which lowers the front of the seat by 4”. The lower seat front makes it easier and safer for Jerry to get in and out of the chair. The anterior tilt is a unique function specific to this Raz product.  Presently, no other rehab shower commode chair on the market can provide 15° of an anterior tilt with a 40° tilt range.

While his Raz-AT chair has made some aspects of Jerry and Joyce’s lives easier, she is clear to point out the important role played by the U.S. Department of Veterans Affairs. “Simply put, we could not survive without the VA.” Joyce states. “As Jerry’s disease worsens, we are able to have home health services help me care for him at home. Without that benefit, he would have to be placed in long-term care, as I would not be able to personally pay for the care he receives. We are very grateful for this.” Joyce’s compliments speak to the immense help the VA has provided Jerry and Joyce. While the VA has eased her financial burdens, and has kept her family together, she also speaks glowingly of the quality of care her husband has received at the VA Gainesville branch. “Jerry has always had the best of care, whether he was in the hospital, visiting his Primary Care Provider, having lab work done, or going to therapy. We have never had a bad experience with anything or anyone we have come in contact with over the past 15 years we have been receiving VA benefits.”

Raz Design takes pride in providing high-quality, reliable, rehab shower commode chairs to veterans. As Joyce points-out, Jerry’s Raz chair has made both of their lives easier in a many significant ways. By working with VA facilities across the US, Raz Design has helped thousands of veterans and their families.