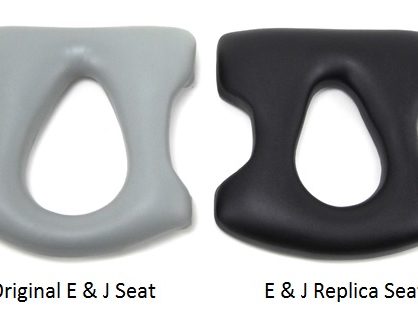 Did you know?… In the 1970s, ‘80s and ‘90s, the leading rehab shower commode chair (RSCC) was manufactured by Everest&Jennings. The E&J RSCC was very popular among veterans during that time. When their old E&J chair wore out, many looked for a chair with a similar seat. In 2015, while working closely with the VA Puget Sound Health Care System, Raz Design introduced the EJR (Everest&Jennings Replica) seat, which had the familiar teardrop-shaped aperture with several other improvements over the Everest&Jennings RSCC. For example, the aperture was narrowed slightly in order to provide greater seat surface, resulting in reduced sitting pressures. The original EJR was built as a custom seat, with layers of Visco foam wrapped and sealed. After analyzing feedback from users of the Everest&Jennings Replica Custom (EJRC) seat, we were able to confirm the ideal shape and begin production of a molded version (EJRM). This dropped the MSRP to $295. So now there are 2 choices: The original EJRC is now treated as a custom product and can be ordered in different widths, depths and aperture sizes. The new, molded EJRM is an excellent choice for anyone who wants a seat that is a similar but improved version of the old Everest&Jennings seat.