Raz Design Making Further Inroads into US and European Markets 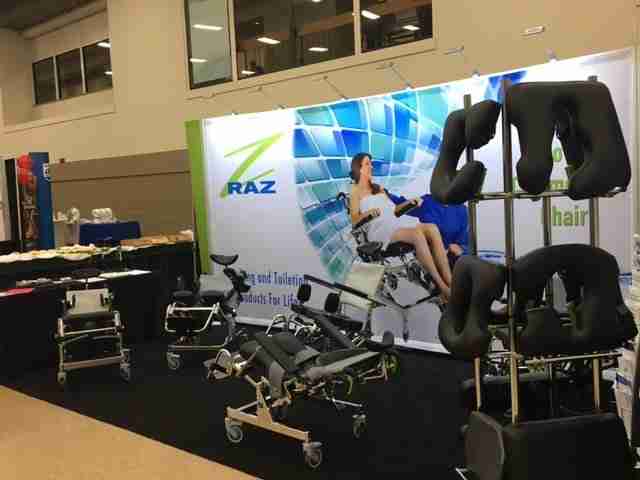 Raz is making it a priority to expand its network of partners throughout the US and Europe. During the past week, the company used two of the most prominent conferences as platforms to concentrate its focus on both regions.

The spring season has been busy for Raz Design. A few of our employees were in Waterloo, Iowa from June 13-15. Meanwhile, other Raz employees were in Dublin, Ireland for the 5th European Seating Symposium (ESS).

From June 13-15, David Harding and Brian Rourke, manned a booth at the Heartland Conference 2016. During the three-day event they demonstrated the latest products for the North American market. The most significant new product on display was the new Raz-CAT, Compact Attendant Tilt. This, the newest model in the Raz range, has a shorter frame, narrower backrest options and seat depth adjustability from 12” – 15”. It is ideal for growing children and for small adults. The smaller footprint greatly enhances maneuverability.

While the Heartland Conference was on, Nelson Pang and consultant Sharon Sutherland were working with our European partners to further spread the word about Raz. Therapists from as far away as Italy stopped by the booth and expressed strong interest in many of Raz’s products. During the course of the show, Sharon Sutherland’s talks were well-attended and helped generate thought-provoking discussion throughout the event. As in Heartland, the new Raz-CAT was the focus. Along with some of the old favourites, such as the AT-Recline,  the CAT garnered significant interest among the attendees. ESS 2016 was the perfect opportunity to expand Raz’s reach deeper into Europe. Company president, Nelson Pang, stressed the importance of ESS 2016 stating, “We have seen tremendous growth in several markets here in Europe, including Finland, Ireland. We are actively seeking dealers and distributors in other European countries, whose clients can benefit from our clinical driven products and pressure reducing seats.”